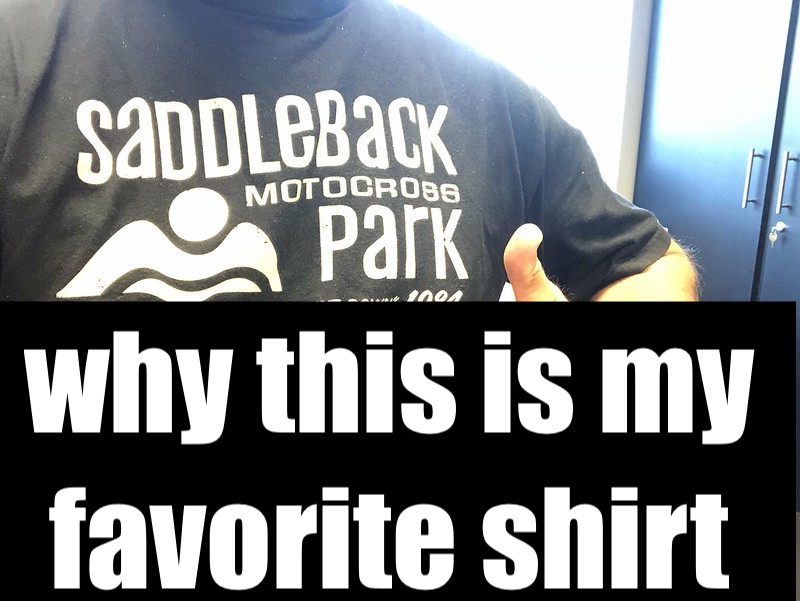 Lets first start with the HISTORY

Saddleback Motocross Park (1967-1984), is possibly the most famous and photographed track in the sport of motocross. The track is often referred to as the “mecca” of Moto Cross, and more national stars emerged from Saddleback than any other track in the country! Saddleback was the first park in the USA designated specifically for MX with the facility containing two MX tracks, hill climb course, flat track, BMX track, and a soapbox derby course. Saddleback Park hosted many regional, national, and international motocross racing events. Where is Saddleback Motocross Park? More like, where was it, as the park is long gone back to the hillside weeds. So where was it?! Technically, it was located in Irvine, California.

Why the name “Saddleback” if the park was located in Irvine, California? Saddleback Motocross Park was located off of Santiago Canyon Road which is in Irvine, California. Santiago Canyon Road leads up to and is in the westerly shadows of mountains looking down on Orange County, California. The Mountain range is the landmark formed by the two highest peaks; Santiago Peak and Modjeska Peak, in the Santa Ana Mountains and the ridge between them. There is a distinct look of these two peaks, a “saddle” as viewed from most of Orange County, California.

My History of Saddleback Mountain

I did not live here during the time of the great Saddleback Motocross Park. But for me, the mountain itself is the playground!

There was a time when I was flying out of town for work quite a bit. I would fly from and back to John Wayne Airport (SNA) here in Costa Mesa, CA. The return flights fly in over the desert, swoop along the 91-Fwy over Saddleback Mountain and down along the 55-Fwy.

It was a great perspective to see what all is around southern California. While making the hop across the mountain, I would see the big KSOX doppler radar tower ball and all the dirt roads on the mountain. That would become my landmark. Once I got the Subaru and the XR400, I was scouring the paper maps to see if I could find a route to and up onto the mountains. Yes, this was before I had an iPhone and access to Google Maps on the move. But, I truly do like exploring and there is no real way to be lost for too long as “civilization” surrounds this mountain on all fronts!

It’s not a massive mountain, but it’s the first range off the pacific coast for Southern California, with an altitude of 5,689-feet. As I write this (11/29/2019), it is getting pelted with snow right here in Orange County, California! Before the mountain became heavily visited, thus more locked-gate-control, I actually got to drive up there in the snow!

Now they keep it locked down when inclement weather threatens hits the hill. And after the Holy Fire, we only have access to half of the mountain.

I’ve graduated from the Subaru WRXwagon (more like outgrown) to an 80-Series Land Cruiser.

Along the way, I acquired this 1998 ATK 605DS. It made a few trips to Saddleback Mountain. Here I am on the Modjeska Peak side of the Saddle in 2017, overlooking Orange County, California. That bump straight out in the Pacific Ocean is Catalina Island.

As long as they have the gate open, I will continue to get up to Saddleback Mountain! It’s the only “dualsportable” wilderness we have this close to my house!