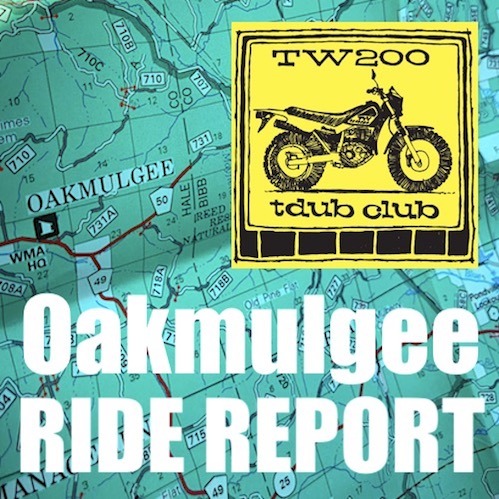 This is your Oakmulgee Division – Talladega National Forest TDUB CLUB Ride Report brought to you by GCRad1.

History and discussion about the Talladega National Forest – Oakmulgee Division – by Dr. Phillips on Discovering Alabama
https://www.youtube.com/watch?v=OGt4L-2cOHU
Dr. Phillips sets out from his farm in Tuscaloosa County and takes viewers on an interpretative walk across the Oakmulgee to Payne Lake. Along the way, he examines a variety of plants and animals that live in the area and discusses the importance of maintaining Alabama’s natural areas.

What’s In A Name?

The Oakmulgee is criss-crossed with roads. Perfect place for a night time navigational rally! In fact, there are so many roads and so many curvy roads that a map of the Oakmulgee Division of the Talladega National Forest looks like an aerial view of a plate of spaghetti. Some are well-maintained, paved roads, such as County Roads 1, 16, and 49. Others are dirt roads maintained by the Forest Service. These roads vary from well-tended, all-season, all-weather roads, to roads that are seldom-traveled and less well-maintained…as in 4-wheel drive and high-ground-clearance advised. Other FS roads may be gated and closed at various times and seasons for sundry reasons. Be prepared for a variety of road surfaces and be open to taking circuitous routes through the forest to ensure easy travel if you are in a typical passenger vehicle.