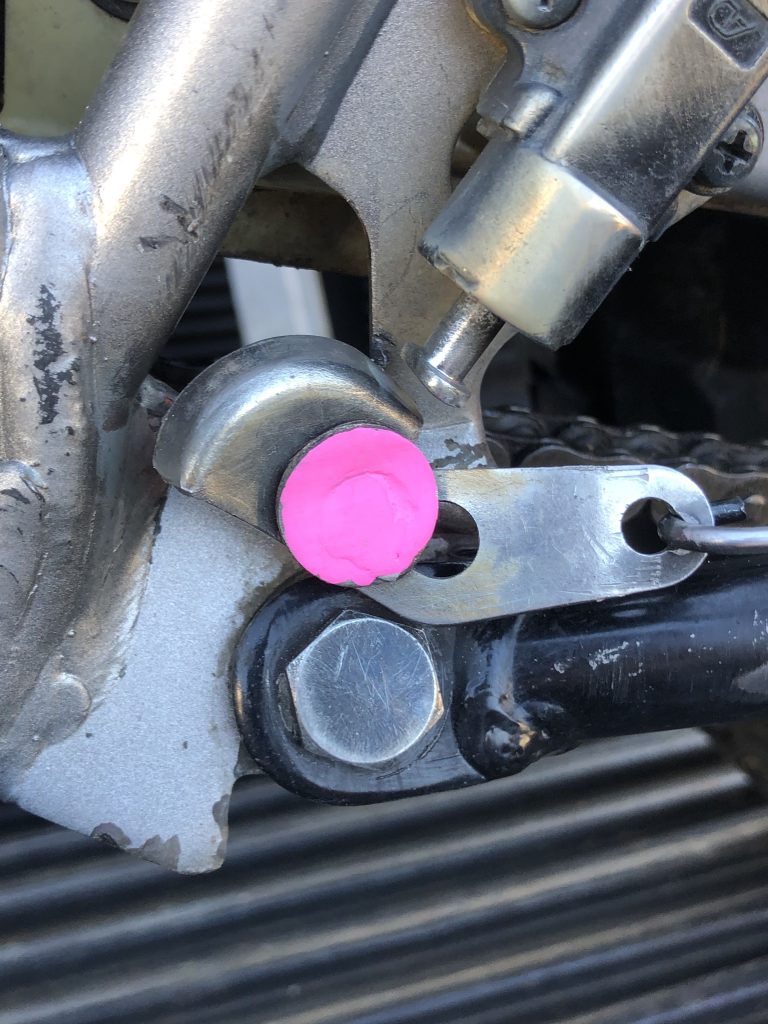 While out riding, I noticed a clanking noise: https://youtu.be/QuOZ8cp1nTA?t=557

The TW200’s kickstand spring is wearing through the striker plate and allowing the kickstand to boing-boing-boing all down the trail!

In my “brilliance” (HA! RIGHT!) I had to fix this right then and there – on the trail! It was very annoying though, and could have gotten worse. But, I had no such luck! AND I MADE IT WORSE – I BROKE IT! So, in true trail-fix fashion, I zip-tied the TW200 kickstand in the up position, put the parts in my pocket and carried on with my ride.

I know I am not going to get the TW200 kickstand fixed as quick as I would like, so I use a velcro strap in attempt to make gas stops and photo op’s easier on my next TDUB outings.

Yea, that velcro-strap action worked GREAT! TOO GREAT! The velcro proved too tedious to undo at the gas station, at the photo spot, at the 10-100 spot and so on… So I did a little digging in my parts bin and found this old KTM rubber band for their super-long kickstands on their enduro’s. This should do the job! For a little while longer.

As evident, it’s still easier to use a tree or anything that will hold the TW200 upright… Whenever the option is available. Even the little KTM kickstand rubber band is not super convenient. Dang dual-sporters, MX bikes don’t even have kickstands! hehehe But too, they don’t have license plates, gas station stops, sight seeing stops and such! Yea, I’ve got to get this TW200 kickstand FIXED!!! I love my TW200 kickstand!!! When it’s kickable!

LETS GET THIS FIXED!!!

Here is what we are dealing with… The TW200’s kickstand striker-plate rides in a notch on the post. I obviously wore that notch out and broke the remaining head of the notched-post off while attempting a field-fix.

This is what we need to sort.. This is the Yamaha TW200’s kickstand striker plate – spring extension.

Yeah, this is about to get real!

No going back from here!

The post that comes out of the frame is now “smoothed off” where it previously broke.

Due to the situation… The TW200’s striker plate is getting “opened-up” where it normally rode in the grooved post.

That looks about right! REMEMBER that first photo at the top of this post, where the spring is wearing through the eylet on this plate? Don’t enlarge the hole at the center. Cut it so it takes that bit of slack back up or we will be right back in the boinggidy-boing-boing state!

This is the desired results… With the enlarged opening, the plate can rotate on the larger portion of the post.

Loaded the TDUB up and off to see my brother. He has a welder!

This is the idea… We will weld a washer onto the end of the post to hold the TW200’s kickstand striker plate on.

In theory, this should work…

Well, it ain’t pretty, but it’s welded on.

We have a fix for pretty! Little TDUB is getting it’s kickstand fixed!!!

That will work! Now I can freely kick my TW200 kickstand down when and wherever I want to!

Until you get it painted, your getting a pink dot so it does not rust… Hmmm, this might be on here for a little while…
So, while this was all going on, my brother and I were “bench race teching” the whole idea behind this Yamaha TW200 kickstand striker-switch spring-extension design. Yamaha has white lab coat wearing engineers, so they had to have a purpose for such design… The untold mysteries of the Yamaha TW200 Kickstand Striker-Switch DoHicky Spring-Extension Design.